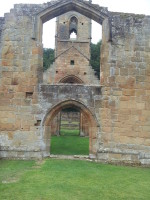 The best preserved Carthusian monastery in England is Mount Grace Priory near Northallerton in North Yorkshire. I decided I must make a visit to get a general idea of the size and layout of a Charterhouse. On this trip I invited Matthew, another of my three sons, to accompany me and after visiting the priory we were to stay overnight in the ‘village inn’.

Mount Grace is an English Heritate/National Trust property. It was one of the later Carthusian priories, founded in 1398, more than half a century later than Beauvale Priory in Nottinghamshire. At Mount Grace there is a reconstructed monk’s cell which shows how Carthusian monks lived an enclosed and solitary life. This life may not seem so austere when judged by the size of the cell, which is a two-storey house with its own garden, but those who entered monasteries were often from the higher echelons of society and were probably used to great opulence. 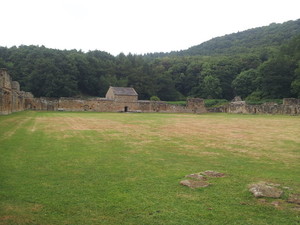 Cloister with reconstructed cell in background 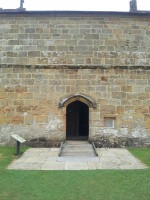 Entrance to reconstructed cell, with hatch on right

To the right of the entrance door there is a hatch for the delivery of food supplies, which were brought by lay brothers (who were really servants). The doors had locks inside, a sign of how the monks treasured their solitude, cutting themselves off from the outside world. To one side is a small cloister leading to the garden which has been replanted with the types of herbs and shrubs that have been discovered in this spot dating back to the Middle Ages. In one corner of the garden is a toilet giving directly onto a channel for sluicing away debris. 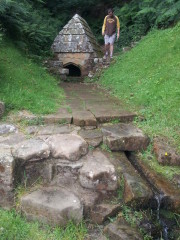 Charterhouses had quite clever water systems, all the cells having their own supply and drains. In one of the ruined cells, Matthew found a small water tower that directed the flow of water from a local source outside the boundary wall towards what was a system of lead drains and stone channels throughout the cloister.

Inside the cell was a small cloister to the opposite side of the garden providing the monk with a space to sit and contemplate. The ground floor has a hallway, a bedroom, a study and a living room with a large fireplace. 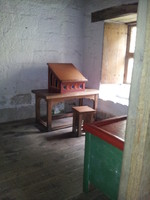 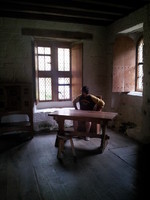 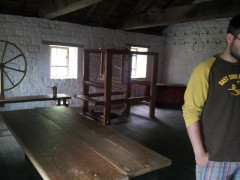 The steep staircase opens onto a large room with windows looking out onto the back. This was used as a workroom. I can’t help thinking that this was a pretty fine existence – lots of space to sit and think and read and write, with a garden to potter about in, and food brought to the door. The strictures of the prayer regime throughout the day might be difficult to get used to and the diet plain, but back then, daily offices and fasting were perhaps more integrated into the rhythm of medieval life as a rule. Every town would have bells ringing from its many religious institutions throughout the day. The constant struggle of toiling for one’s daily bread was largely left to lay brothers in a Carthusian house. 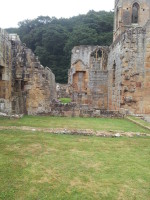 The tower and layout of the church in the centre of Mount Grace is a stark reminder of how monasteries such as this were destroyed during the 16th century. Such desecration is hard to stomach, yet the partition of priests/choir monks from the lay brothers in chapel is also a reminder of how unequal society was. This inequality was, however, not the motivation behind the all-powerful King Henry VIII and his men wanting to get their hands on monastic wealth. The brutal dissolution was an echo of the way King Philippe le Bel of France (during Marguerite Porete’s time) acted politically and mercilessly to get his hands on the wealth of the Templars, which was a bona fide religious Order instituted by papal recognition in the 12th century. 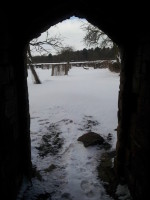 The atmosphere of Mount Grace did not have the same charm for me as the smaller and older priory at Beauvale (see Travel Log 25th March). Perhaps this is because I have a connection of birth with that area of Nottinghamshire where the coalfields were later worked by people like my Dad. It is intriguing that alongside the existence of the Chartreuse of Marly near Valenciennes and the Beauvale Charterhouse near Nottingham, possibly as a place of literary production and translation of French lay literature, there is a connection of industry. Valenciennes and its environs were also an important coal-mining area. The textile industry and lace-making are two more important shared traditions of both these old cities.

We did the tour of the Mount Grace museum, housed in the manor house built on the foundation of the priory after the dissolution. There is a model of how the priory looked before it was destroyed, confirming the vastness and sophistication of the building in the Middle Ages. 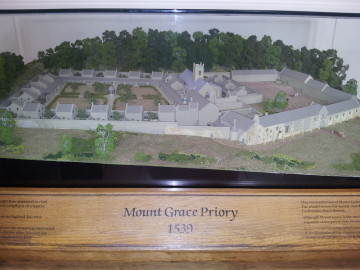 It was too late for lunch, so we opted for afternoon tea in the nearest town and then checked in at The Village Inn in Brompton. After some time to relax in our lovely en suite rooms we had a delicious steak with big chips and a bottle of red. It was great to catch up on Matt’s news and spend a bit of quality time together, so rare in our busy modern lives. 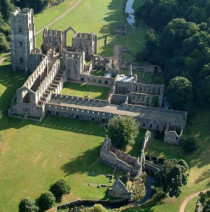 Next day after an excellent breakfast we went for a walk around Fountains Abbey, a former Cistercian monastery. Again, the scale of the outer walls containing the abbey was staggering. Poverty, one of the vows that monks and nuns were meant to take, seems a long way from a reality in these edifices. On researching the art of parchment making, I discovered that urine was used for tanning animal skins to remove the fat and sinew. An abbot’s urine was apparently the most effective as he had the richest diet! No wonder the mendicant (begging) orders, Franciscans and Dominicans who relied on charity, were mistrusted by the fixed orders. They cannot have liked being reminded of the nature of the gospel message of poverty and charity. And little wonder that the mendicants were severely criticised when their Orders began to accumulate wealth and property. In addition, in Paris in the late 13th century there was heated rivalry between the secular masters and the Dominican Preachers at the Sorbonne. The Dominicans were amassing numerous professorships (chairs) at the University. There was also rivalry between local clergy and the mendicant orders in towns such as Valenciennes: who had the right to hear confessions? The parish priests saw this as their prerogative and fought the friars tooth and nail to keep control of the spirituality of their parishioners. 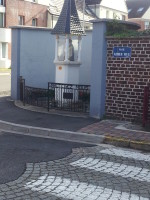 To complete my research on Carthusian monasteries, I have to read anything I can findon Notre Dame de Macourt at Marly. This means I will have to make another trip to Valenciennes. Research is a terrible job, but somebody has to do it! So watch this space.