Men of Power: Court Intrigue in the Life of Catherine Howard by Elisabeth Wheeler 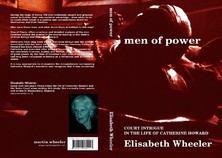 Men of Power by Elisabeth Wheeler

In the preface to her insightful and painstaking study, Men of Power, Elisabeth Wheeler notes that the Act of Attainder against Catherine Howard remains to this day on the statute book and that it is time to remove it and acknowledge her execution was unmerited. The Act was the sneaky method by which the Privy Council wangled Queen Catherine’s execution, without the need for appropriating the King’s signature on a death warrant.

Despite the difficulty of engaging with such meticulously detailed research based on copious documentary evidence, I found the conclusions to which this book slowly builds absolutely stunning. I have always been gripped by history, particularly the turbulent era of the Tudors, but Wheeler’s thorough study grasps the culture of Tudor political and juridical structures in a way that leaves us with little doubt about the unfortunate fate of Henry VIII’s fifth queen. The evidence points to the conclusion that she was murdered by the plotting, ambitious ‘men of power’ of Henry’s court who had set a course of gradually eliminating old branches of aristocratic and royal families who were closest to the throne.

There are three compelling facts about the documentary evidence of which I had been ignorant before reading this book, facts which must call into question the received history that Catherine was guilty as charged:

Catherine was kept away from all the proceedings, imprisoned at Syon Abbey, and was brought to the Tower only one day or maybe a few days before her execution. Wheeler suggests the execution may have taken place in private, the implication being that Catherine might have kicked up a fuss. What Catherine had to say may have been too dangerous for witnesses to hear. Memories of the Countess of Salisbury, Margaret Pole, were too recent. Less than a year before, this 68-year old lady who was one of the few remaining Plantagenet heirs, refused to meekly lay her head onto the block. She declared her innocence of treason till the end, an end which was a gruesome spectacle on the scaffold.

The evidence for the privacy surrounding Catherine’s execution adds up, and perhaps I have been as guilty as anyone of setting too much store by cultural depictions of her based on hostile historical documents.

﻿For those who wanted to prevent a Howard heir from arriving, the young queen had to go and a further reason for doubting the legitimacy of the charges against Catherine lies in the unambiguous resemblance between her downfall and that of her tragic cousin, Anne Boleyn. For instance, both were from the powerful but resented Howard family, both were accused of adultery with one of Henry’s favourites from the royal entourage, both women were rumoured to be pregnant around the time the intrigues were getting underway, both were accused of a sexual relationship before their marriage to the King, both were isolated after their arrests.

Wheeler manages to bring all these threads together, delineating the complex relationships between the political players and their families. The names of these ‘players’ appear regularly on court documents and Wheeler tracks their gradual preferment to the high offices they gained.

This book urges us to heed the graffiti that can still be seen on the wall of Gainsborough Old Hall: ’trust truth only’. These words were inscribed in 1541 by Sir Thomas Tyrwhitt during the northern progress of Henry VIII and his young queen and inspired Wheeler to research what might lie hidden behind Tyrwhitt’s enigmatic message. ﻿She shows how Catherine was caught in a web of power and ambitious plotting from which there was no escape. Even the King who apparently wanted his young queen to have the opportunity to defend herself was assured by the men of power around him that she had confessed her guilt and refused to speak in her own favour.