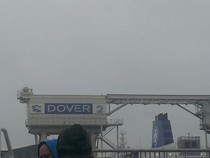 I had to be up at 5 to make the 8am ferry from Dover to Dunkirk. It felt surreal to be facing Europe on my own without family in the car. And nobody to navigate.

Ben seemed totally unconcerned at my goodbye hug. He won't miss me, then!

It was dark as I drove off...but I had to slip my hand into the zip pocket of my bag to make sure (for the nth) time that my passport was where I had put it the day before.

Passing an accident on the M25, I made a mental note to myself to watch my speed and drive carefully. My mind was constantly checking details, scanning the horizon for possible happenings, both foreseeable and unforeseen.

The M20 Brenzett junction recalled trips we'd made to Camber and Rye with Matt and Tom, and then later with granddaughter Sophie.

Entering Dover via the sea front instead of by Jubilee Way also jogged memories of our honeymoon search for a restaurant. I realized I had removed the Eurythmics CD from the player which had been Ian's choice of music to accompany our nuptials. He remembered that too...as his text asked whether I was listening to it while in the lane to board the ferry. The Killers will have to substitute.

I used the wait to stick the beam adjusters on the headlamps. The two blokes in the car ahead watched me with a slightly amused look on their faces. Needless to say, after several warnings on board about European law, at disembarkation they were fitting their own. Should have got them from ebay!!

The crossing had been foggy. I tried not to think of Thownsend Thoresen and calmed my nerves with a plate of beans on toast...always my favourite. Cheap too.

Back in the driving seat, I repeated the mantra: drive on the right, drive on the right. And hoped my satnav would work abroad. It does! Very impressed with it...had absolutely no problem finding Bruges after an easy drive across acres of flat land. The nerve-wrecking bit was driving down the narrow cobbled streets of this medieval city, still so clearly beautiful despite the fog. 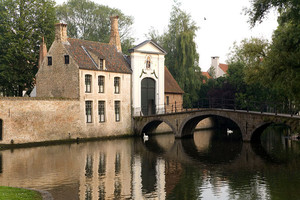 I had come to Bruges to view the beguinage. It was established in 1245 and is still an enclosed courtyard of houses, although it is now a Benedictine nunnery. Not much of the medieval setting remains. This mainly 18th century building does give an idea nevertheless of how beguines, pious lay women from a movement which emerged in the 13th century, lived an industrious and evangelical life; but this life was not enclosed with binding vows like for nuns. Beguines became the backbone of the textile, and later the lace-making industry of the Low countries, as their founding charters demanded that they live by the work of their own hands.

As with my recent research on Carthusian monasteries I was surprised to find how large the living quarters were. I guess this was the house of a more well-to-do lady... Beguines were a mixed bunch, deriving from all echelons of society. I did think it was a bit of a cheek that the information sheet stated that there are now no Beguines left, and that the present residents (Benedictine nuns) have brought 'real monasticism' there. Poor Beguines; while they certainly avoided monastic enclosure, they still appear to be viewed as following a ‘pseudo’ form of spirituality. Tending the sick and teaching the poor in the world is apparently less 'real' than cloistering oneself. It is interesting that the label given to Marguerite Porete at her condemnation in 1310 was 'pseudo mulier' or pseudo woman; I am keen to determine what is true faith and what is not. More later about mystic Meg’s fate.

In my planning, I had decided to go to the coast where the mouth of the river Scheldt/Escaut enters the North Sea. I wanted to see with my own eyes the lie of the land, since the Escaut is the river on which Valenciennes is built. In Marguerite’s book, The Mirror of Simple Souls, she uses an analogy about rivers flowing into the sea to explain how the Soul can unite with God, becoming the same in essence, but not in nature. The river remains a river but the waters merge into each other and the tributary loses its name. I wanted to see the place where she may have seen the sea. So my next stop was Breskens, just inside the Dutch border (there are, however, no working border posts now – very different to when I first came onto the ‘continent’ as it was called, nearly 50 years ago). Again I drove through lots of flat open land, where everything is waterlogged.

The Guesthouse de Passant is lovely, although I don’t think their two steep staircases would pass our building regs. A walk around town and on the beach whet my appetite. Although it is smaller, and not quite so picturesque, the feel of the town put me in mind of Bournemouth – an out of town spot to spend a quiet weekend, with the drawing power of some Michelin starred restaurants. My budget did not run to that level of culinary delight so I had a delicious steak in the new steakhouse. The coffee was possibly the best I ever tasted. After that every other cup will be a disappointment.

I retired after a nice hot shower with the thoughts on my mind: Can I write this book about Marguerite? And how to write it.

And so to bed. 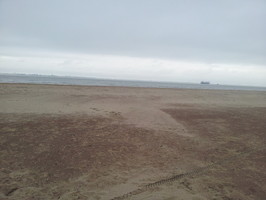 Estuary of the Scheldt & Beach