Over lunch the thought crossed my mind (as it has several times) about why I might have ended up here at a table on my own, in a brasserie, in a foreign town; why am I roaming around Europe and generally enjoying myself, with lots of new experiences, widening my horizons? It slowly dawned on me that I must be a chip off the old block. Now, my Mum was a daughter of good working class stock; a  war-time teenager who would not have been given great aspirations beyond her station. But she does have a massive adventurous streak. She fell in love with, and married a Hungarian, who had come to England with the National Coal Board. I wonder what my Granddad made of that relationship – Granddad had fought in the First World War trenches and been awarded the Military Medal for bravery in the field in 1918 (I later noted, after consulting a map, that that had happened a mere 50 miles from where I was sitting). Hungary had been on the enemy’s side in both World Wars. All the same, my grandparents made my Dad welcome, and the rest is history: my parents will celebrate their Diamond wedding in June this year.

It was with great trepidation that my Mum took the plunge to fly over to Austria, at the NCB’s expense, to spend Christmas 1956 with my Dad; he was acting as interpreter for the NCB, working with refugees escaping Hungary in the wake of the 1956 revolution. It was the first time she had been to London, never mind boarded a plane and stepped foot on, what was then also very icy, foreign soil. She has adored travelling ever since her stay in Graz that winter, and has been responsible for working to ensure we could have transport to travel to Hungary many times; the first time was in 1965 when Dad saw his homeland for the first time since 1944. So in lots of ways I am following in the footsteps of my Mum.

Here is a video link to an American newsreel about Hungarian refugees.

Finally I made it into the library for 2pm. I was glad I’d done my homework via Google, having noted down the references for the three journals I needed to consult. It made my request much easier. I am absolutely bowled over by the reception I received from the staff at Bibliothèque Valenciennes. They found me the journals which were in a special area dedicated to ‘patrimoine’ (heritage). I was taken to the patrimoine study room, which is equipped with those posh study lights (you’ve seen them in Morse, when he has to visit Oxford reading rooms), and met the very obliging librarian who would organize photocopying, and send for documents to be located and brought from the archives.

I spent the whole of the afternoon with the 87 page article by Bernadette Carpentier, who had done all the hard work of consulting the medieval manuscripts about the St Elisabeth beguinage of Valenciennes. Her article is a mine of information about the location of the beguinage, its patronage, its establishment and its governance. It was named after the newly canonized Saint Elisabeth of Hungary (1235). Out of the many interesting facts, I was struck by the title given, by the end of the 13th century, to the woman who had oversight of the beguinage: “la Souveraine”. This was an unusual title, as these women were normally called “Magistra” or “Prieure”. This raised a question about Marguerite's challenge to the idea, and practice of submitting one’s will to another: was this challenge a reaction to a beguinage that was turning into a carbon copy of a convent, with a bossy head honcho-esse? Whatever the case, we have some names of the beguines in charge.  Mahaut de Melin was the Souveraine in 1295, and so a contemporary of Marguerite’s. The "Maitresse" who was in charge of the hospital for which the beguines had responsibility, was called Isabeau du Chatel; 10 years before this, in 1285, the Maitresse in charge was called "Marguerite de Gand" (Margaret of Ghent). I tried not to get too excited, because there were many Marguerites around at that time, and Ghent was a big city.

I also discovered that the beguinage of Valenciennes was situated in the Notre Dame quarter of the town – only a few streets away from my present pied à terre at the Hotel Notre Dame. What is more, there is still a street called Rue du Beguinage, and an “Enclos du Beguinage” (enclosure). I vowed to visit this area the next morning since the library was not open till 2pm on Thursdays, and I had to come back and finish my reading (just a bit slow with all the words being in French – my head and eyes were popping).

At the end of the session the lovely librarian put my journals aside so I could come straight back to them tomorrow. She asked me if I am a researcher, and when I explained what I was researching she gave me the email address of the head librarian. She suggested I send her a request and explain what I am interested in, and ask if I could look at manuscripts held in the archives. I duly sent off the email and kept my fingers crossed. 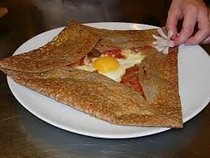 I decided to try a galette at the Kervegan, on the way back to the hotel this evening so I could settle down and start typing up this journal. I had taken to scribbling my thoughts each time I was sitting on my own at a table; this made me look like I had a purpose for being there, other than just eating. The Normandy themed eatery took me back to the craziest holiday we have ever spent as a family: in an old VW camper van, which had an alternator that kept packing up (once memorably on the slip road of a fast auto-route, in the rain); with 8 month old twins who both started with diarrhoea and sickness the moment the ferry put out from Poole harbour for St Malo; realizing even then that my French was deteriorating when we mistakenly ordered roast pony for lunch instead of what I’d thought was some kind of poultry. The higher moments were Ian and Adrian’s hilarious interpretations of an Egyptian painting in the chambre d’hôte where we stayed in Cancale on our 'limp' back home, and the lovely galettes we had for dinner.

Back to the present itinerary, I was wondering whether to stay an extra night in Valenciennes on Friday, or book somewhere on the way to Chantilly. I had left one night without a hotel reservation because I didn’t know what my research might unearth, or where it might lead. I was thinking of a night in Cambrai, the seat of the Bishop who condemned Marguerite’s book. But there was another heavy snow shower as I entered the Kervegan. Should I stay or should I go, now? I decided to wait and see what the weather was like tomorrow and how I got on at the library. 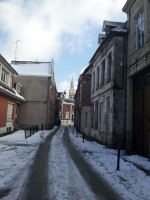 I still feel a long way from knowing who Marguerite Porete is. I also still feel nervous about approaching all these new fields of experience (despite having my Mum’s genes), in a constantly changing environment, in a foreign language, groping my way round, worrying about the car…… It is salutary how important friends and family are. For all its downsides, Facebook is a great way to make a quick link with home and loved ones. One issue I need to consider is the vast gap between our modern (or to be correct, post-modern) existence and the medieval outlook. Horizons were definitely far narrower for the majority of people then. Leaving their village to go to market was for them as great a challenge as my Mum’s trip to Graz. I found out, by the way, that there used to be a specifically designated area in Valenciennes for the “marché de fromage”. This place is really growing on me! My love of cheese is another inheritance from my mother.

I left the restaurant with a further reflection on the awkwardness of being alone, but I realize the awkward-

ness is about my own perceptions of myself, and not about how others perceive me. Discovering more about the 13th century woman who stood alone will, I hope, bring me a discovery of my own confidence to speak, write and be who I am.

Going out alone into the cold, dark night, I felt a sense of excitement, not of anxiety, about another day of exploration. And the snow had stopped.