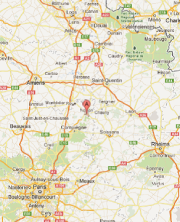 Noyon at Point A

This morning was ‘make your mind up time’ (for all those who remember Opportunity Knocks). I decided to move on after a last morning spent in the library with two more articles I needed to study. What I hadn’t decided was where to move to. A place called Noyon had surfaced in my reading. This was a city that was laced with significance for the nascent nation of the Francs with its cathedral dedicated to St Eloi; this is where both Charlemagne and the first Capetian King, Hugh, were crowned. It is also roughly half way between Valenciennes and Paris. I wondered whether Marguerite stopped off there en route to her meeting with the Inquisitor of Paris? So I booked a 3 star hotel that had a last minute offer on, called l’Hôtel de Cèdre. Although a little snow had fallen in the night, the sky was now blue. So I packed up the car, paid the bill and drove to the library. I now know my way round Valenciennes without a map. I feel like a native and so parting is going to be a sweet sorrow. But first, to work. 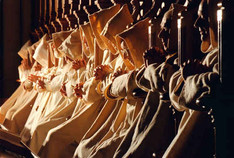 Today, as I walked in, the Librarian who had been on duty the day before passed me the books I’d been consulting as soon as I approached his desk, without me having to ask. The first of the two items I wished to study was a Master’s project on the subject of a Carthusian monastery (a "Chartreuse" in French – and yes, that is where they make the liqueur; monks know a thing or two). This Chartreuse was located at Macourt in Marly, a suburb of Valenciennes. It was established in the 1290s but the monks moved into the city in the 16th century after the monastery was destroyed in the wave of protestant iconoclasm. So why, you are thinking, am I interested in Carthusian monks? What have they to do with a humble beguine?

As I have mentioned, there were 19 religious foundations of one sort or another in Valenciennes by the late Middle Ages, which was usual for any city of that era: there were Carmelites, Franciscans, Dominicans, Benedictines and Augustinians. Marguerite in fact names most of these brethren in a poem in her book as being critical of her writings and theology  (chapter 122, page 200 in Babinsky’s translation). Funnily enough she doesn’t mention Carthusians, but perhaps that’s because Chartreuse wouldn’t rhyme with anything?

So here is my interest with regard to The Mirror: at some point in the 14th century a copy of Marguerite’s treatise somehow made its way across the English Channel. It was translated into Middle English (twice by a monk whose initials were M.N., his first version not being up to scratch). A historian has suggested that the manuscript was brought over by someone in the retinue of Philippa of Hainaut in 1327 when she came for her marriage to Edward III, and which took place in January 1328. Walter de Manny (Masny in French) has been nominated as a strong possibility. The village of Masny is a few miles from Valenciennes and it had a small beguinage; Walter was an ancestor of one branch of the noble Croÿ family, who had lots of manuscripts confiscated at the time of the Revolution. These texts included the collection of spiritual writings which contained Porete’s chapters 78 & 79 – the very piece that I had been translating earlier this week. So there are many possible connections with Marguerite. Furthermore, Manny was one of the founders of the London Charterhouse along with Michael Northburgh, Bishop of London. The intriguing part is that there are three extant medieval manuscripts of the Middle English translation of The Mirror which are all of Carthusian provenance (one in the Bodleian, one in the British Library and one in Cambridge St John’s College).

My question: did Marguerite herself have any connections with the Charterhouse of Marly? I was excited to discover that Notre Dame de Macourt (the name of the Chartreuse at Marly) was on the same side of town as the beguinage. It was situated a little upstream on the Rhônelle, which flowed through the mill at Marly, and on through the beguinage before it reached the Escaut higher up town (near where I had parked my car on my first abortive trip to the library). I will add more later about the Carthusians, but for now I had discovered what I wanted to know: where and when the Chartreuse was built, and some extra detail for good measure. Sadly, during the French Revolution the later Chartreuse in the city was not only disbanded but some of the monks and priests who would not swear the oath were executed by that egalitarian method, the guillotine. I say egalitarian, because before 1789, the ‘ancien régime’ was characterized as much by its hierarchy of capital punishments as its economic and social demarcations: quick, clean decapitation was reserved for any of the nobility that erred, whereas anything from hanging, to being torn apart limb from limb by wild - or more accurately put -  aggravated horses was reserved for commoners. I had learnt this at the Castle of the Counts in Ghent. 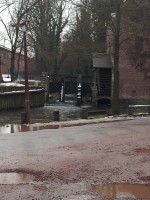 I decided I would have a quick look at the medieval mill that still stands at Marly on my way out of town. This mill is called "Le Moulin Souverain" because it was owned by the Count. It turned out that the mill was just around the corner from a shrine marking the location of Notre Dame de Macourt (the medieval Chartreuse).

The second piece to work on this morning was a chapter out of a book on the relationship between castles and cities in France. There was indeed a “Castle of the Count” built in the latter quarter of the 13th century in Valenciennes. Or to be more precise, it was built just outside the northern walls of Valenciennes. This fortress has long since disappeared, but excavations have shown where the foundations and ramparts were, and some of those trusty manuscripts tell us about the territorial battles for control of Hainaut and its capital Valenciennes; in so doing they reveal some information about the castle's position and purposes.

The castle was a fortification to enable Count Jean d’Avesnes II to overcome resistance in the town to his rule. He also used the castle to keep a guard over his mills that were powered by the River Escaut. There are two points to clarify about this: First, the folk of Valenciennes seem to have been a stroppy bunch back then, who were not happy to have someone dumped on them as their feudal lord. They made their feelings known, and even built two of their own competing towers on the northern ramparts of the town to counter the Count’s siege. Second, mills were of extreme importance. Whoever had control of the mills had control of all the people, for they owned the means of life. Everyone had to have their grain milled in order to feed themselves. According to one of those medieval records of donations I was reading the day before, the beguines were given ownership of a quarter of a mill. This enabled them to be self-sufficient. ﻿

Building castles to ensure security of one’s seigneurial power was not restricted to this city – the Count-Bishops of Cambrai and of Douai built castles for this purpose. The Castle at Valenciennes was never meant to be a residential palace; it was separated from the town wall by ditches and when the military need was over, it became used as a prison for use by the Count’s provost, like the Castle of the Counts of Ghent. The treaty of 1297 had concluded a particularly turbulent time of Hainaut’s history. This era was a time of political power struggles, and for our interest, this was the context for Marguerite’s writing, when she was disseminating her ideas.

Now I knew much more than I did when I came, I left Valenciennes with a thank you to the librarian who I felt had accompanied me on my journey of discovery, and left for Noyon.

After the photo opportunity at Marly, I set off but couldn’t resist a quick look at Cambrai, since it was on the way. The medieval gate that stands at the Porte de Paris is impressive, but was not built until 1339 to protect Cambrai from the English in the 100 years war. This is a town that has been beset by war, the First World War being no exception. I decided to move on as nothing caught my eye. Somehow I felt Noyon would hold more of interest and I was not disappointed.﻿