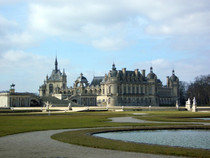 Yesterday I had intended to visit the Musée de Condé, housed within the magnificent Château de Chantilly which I had seen in all its splendour on my way into the town. This is where the only extant French manuscript of The Mirror is kept (hence the “Chantilly Manuscript”). I was diverted from my mission by several considerations:

First, I have recently discovered that this MS is not the earliest version of the text, being of 15th century provenance and in a later French than the Valenciennes chapters; the English translation may even be closer to the original. So Chantilly is losing its lustre a little.

Second, I had already driven up the long cobble stone road that linked the vast stately home with the town. It was a real bone shaker. That had been traumatic enough, inching along with impatient locals behind me – I stayed in a low gear and refused to speed up in respect to my Skoda, which had served me so well thus far.

Third, the lure of a good internet connection and several days of journal to write up drew me to my lovely room, which overlooked the Avenue de Maréchal Joffre. So I’d had a quick walk up to the station at the other end of the avenue intent on completing three easy missions I’d set for myself: a) find a cash machine to draw out some Euros – Paris is likely to be expensive; b) check out the station car park to determine if I felt safe leaving my Skoda here during my Paris jaunt; c) get a coffee in a nice café where I could jot down a few notes about Noyon. Success in all three meant that I could relax and enjoy an excellent meal in the hotel restaurant that evening.

﻿ So this morning I reorganized my bags so that I only had one case to manoeuvre onto the train. I set off for the station and all went well. I caught the 10.15am to Paris Nord and worked out that I could stash my case in a left luggage locker, whizz up to Saint-Denis and back on the metro before I had to meet Tom. He was due to arrive by Eurostar around half past four. ﻿ 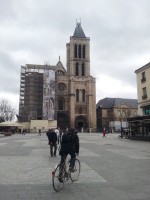 Saint-Denis is the district just north of the boulevard périphique. Here is the Basilica built in high Gothic style which houses the necropolis of the French Kings and Queens, and other hangers-on. It originally was built to house the reliquary of St Denis, the patron saint of Paris who was beheaded on Montmartre (mount of the martyr). Louis IX, ever with an eye to capitalise on the sanctity of the monarchy, had the tombs of all 16 former Kings (8 Carolingians and 8 Capetians) arrayed here in an arc shape. It also housed his own relics for a while, where purportedly they caused many a miracle toward the end of the 13th century. This led to his canonization in 1297, as pushed for by Philippe Le Bel. 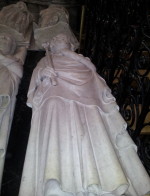 I was getting a little overwhelmed by relics and royal holiness, and here I was about to be underwhelmed by the vast array of royal “gisants”, most of which looked the same. A gisant is a stone effigy which is made from a death mask and laid on the top of the tomb. Again, the French Revolution played its sacrilegious part when many of the royal sarcophagi were desecrated and the bones of dead aristos were exhumed. Much has now been restored, and just a few things caught my eye and curiosity: It must have been the trend in the 16th century to fashion the Kings’ and Queens’ gisants in their birthday suits with little more than a flimsy veil over their nether regions to provide a vanity screen. Catherine de Medici with her boobs on show was a little weird. If anyone knows why this was the trend, answers in the guestbook please. 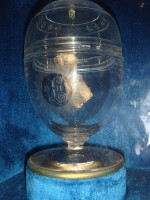 The most poignant sight was the memorial to Louis XVII, the young son of Marie Antoinette and Louis XVI who were both guillotined in 1793. Having spent his last two tender years in prison, where he was possibly abused by his gaolers and forced to accuse his own mother of incest, he was posthumously viewed as having been King from 1793 to 1795. Hence at the Restoration of the monarchy in 1815, the next Louis was number 18. Below a stone carving of the 10 year old boy in profile, there is a glass receptacle containing his heart. A tiny little piece of mummified flesh which has been DNA tested and proven to belong to him.﻿ 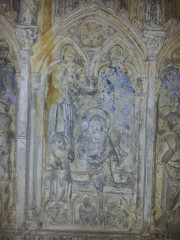 St Denis was definitely worth the visit, although I was feeling that I had already OD-ed on gothic recently. I was also beginning to feel a little separated from Marguerite, as though her trail was going cold for me. I wondered whether this separated-ness was what she might have felt when arriving from the North, into this medieval stronghold of Capetian iconography and power? The sight of these immense gothic structures which could be seen from miles around, across surrounding farmland, would have had even greater impact then, when Christian faith was part and parcel of life. The colours were alluring, the religious processions exciting, and the richly dressed clergy and nobles were a holy caste apart.

﻿I had felt closer to Marguerite in the northern towns, and particularly in Valenciennes. Medieval ‘tat’ was now getting in the way. You can have too much of a good thing. Maybe I should keep this in mind for Paris. 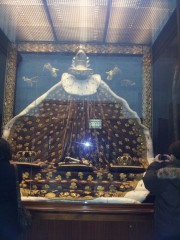 The merging of royalty and sanctity found at Saint-Denis may be hard for us to grasp. Yet I wonder how deeply it is still engrained, as it was for all the royalists who strove to restore the monarchy in France. What do the French now feel about their past? So much anguish, so much pain, so much tyranny. Not that our history is any easier.﻿ 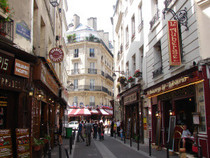 On the way back to the metro I stopped off for coffee – actually two coffees, and wrote some of these reflections in my notebook. It was then I learnt from my son Tom that he was going to be arriving late, because his train from Nottingham was delayed and that in turn meant he missed the Eurostar check-in. So I arranged with the owner of the apartment I had rented in the Latin quarter to check in early, and then I would go back to the Gare du Nord afterwards to rendezvous with Tom. I picked up my luggage en route and then made a minor error with the Metro stop – I had to walk from Place St Michel through many of the narrow streets to find Rue des Anglais (appropriate name). I actually enjoyed the walk despite having to drag my case across the cobbles, past the St Severin Church and all the vast variety of bars and eateries. 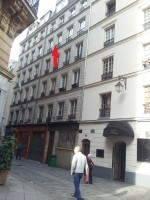 Our apartment on the 4th floor

I met Alexandre, our lovely young landlord, on the doorstep. I was glad of that because he kindly carried my suitcase up the 4 flights of winding stairs. It was quite heavy, as amongst other things, it contained my laptop and a bottle of gin that I had bought on the ferry. ﻿ 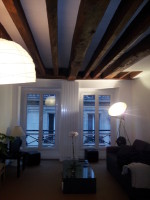 The flat is truly charming with old beams and all mod cons, tastefully decorated with an easy pull-out sofa bed in the living room for Tom. There was one problem, which was to become rather tiresome over the 5 days we were there: the shower would not switch off due to a faulty valve so we had to keep opening and closing the mains tap every time we needed to go to the loo, wash up or indeed have a shower. We only tried to use the washing machine once, as this resulted in nearly flooding the bathroom when the shower tray filled up and seeped through onto the floor. Not quite as disastrous as our Normandy holiday with sicky babies, just a wee bit annoying.

I am sure it is much better accommodation than that provided for Marguerite in autumn 1308. One big question is: where was she imprisoned? The city had been full of incarcerated Templars since September 1307; they must have been running out of space. Prisons as such had not been built at this point in history. Old castle "donjons" were used, from which we derive the word dungeon. And as we have seen, redundant fortresses were also handy. In the Middle Ages, prison was not in general a place where people were totally cut off from society as it is now. There was plenty of to-ing and fro-ing, although maybe this was different for political prisoners and suspected heretics. Heretics were viewed in the same way in which we now view contagious diseases. Their virulent teachings were to be stopped and contained before causing damage to the vulnerable Christian flock.

Poor Marguerite had over 18 months of imprisonment to endure, and this begs the question of how dire the circumstances of her captivity really were. It is possible that even if Marguerite's goods had been confiscated on her arrest, she may yet have had someone providing for better surroundings than we might have imagined. Money and influence can always buy comfort. ﻿Or did she really suffer prolonged deprivation? This seems unlikely, in that she retained her resolve to remain silent and firm in her convictions till the bitter end. 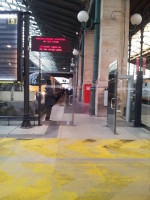 Finally Eurostar arrives with Tom on board

Having viewed our comfortable lodgings for our five day sojourn in Paris, off I went to the Gare du Nord for the third time that day – via the closest Metro station which was just around the corner from the apartment. After another delay of 20 minutes, Tom arrived in Paris.

We settled into the flat, found a place to eat and finally I had a table partner to chat to. We agreed that we would sometimes do our own thing, and discussed the things we might to together. I realized I might get a little dizzy this week from the cocktail sessions, but what the heck – time to have a bit of fun!

My last thoughts with regard to Marguerite were to wonder whether she had any family. Who were they? Is it feasible she had married and had children? Was she a widow like many beguines? How did her family life, her relationships with her nearest and dearest affect her writing? Paris might not be the place that would help settle these issues, but having a companion along, it was time to open my horizons to someone else's view of the world.