Snow… and lots of it. The Skoda was covered. I did not really want to move it but I would have to before the afternoon because of parking restrictions. So I gritted my teeth and did some scooping with an improvised (i.e. empty) cardboard sandwich wrapper. My hands were freezing despite my leather gloves and I took the plunge of driving up town to the municipal library - the one that has all sorts of amazing stuff in its archives.  I had studied the map and thought it would be easy to find, with only two turnings, so did not turn on the satnav. The engine struck up first time again.

After several circuits of the area of town in which the library was hiding from me, I slid into a space in the free car park I had been planning to use. Fortuitously I had thrown my hiking boots into the car at the last minute before leaving home, in view of the footslogging I would be doing round Paris later in my odyssey. To date I have not slipped over once, although there have been a few close calls, when the snow started to melt to slush and then froze again overnight.

I found the library where it was supposed to be, but in my defence, it does not look like a library. The Bibliothèque Valenciennes is housed in a former Jesuit college, which was disbanded during the revolution of 1789, like all other convents and monasteries. It is attached to the music academy, also part of the original Jesuit complex of buildings. I trudged along the icy pavements, only to find a notice on the front door announcing that the library was closed today, due to the unusual weather conditions and low staffing numbers. So back I trudged to the car park, and back I slid, taking in the other half of town, whilst trying to find my way to my warm room. At least Valenciennes and I are becoming acquainted. 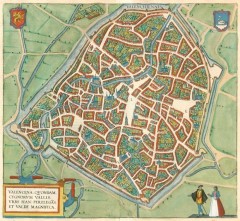 Map of Valenciennes in the late Middle Ages

During my absence a free parking space had presented itself opposite the hotel, so I slipped in quickly and hey presto, no more parking charges for the rest of the week. I will walk everywhere instead, especially as I must now know my way around. Once ensconced in my lovely big queen sized bed with a grand café crème beside me, I got back to my translation of Marguerite’s book. I am using a copy of the published text of the Chantilly manuscript, which a kind colleague of mine from Truro diocese procured for me.

Page from the Chantily ms.

The Chantilly ms. is the only Middle French version of The Mirror that is accessible and has been published in full. Serendipity had definitely struck when I linked up with my colleague, David. He underlined this point when he quipped that there “are not too many Porete nuts to the square kilometre in Cornwall”!

Yesterday I had completed a rough translation of two chapters of The Mirror that had been discovered embedded in a 15th century collection of spiritual writings. This was another of those manuscripts confiscated by the Assemblée nationale. These two chapters were written in a picard dialect of Old French and so are closer to the original of what Marguerite wrote before later editors got hold of her work. It is intriguing to think that when events took a turn for the worst, Marguerite must have known there were some copies of her writings still at large, despite attempts to confiscate and burn them.

To fill you in a bit, the reason why Valenciennes is pivotal to her story is that it was in this town that her book was first condemned by the local bishop of Cambrai and burnt in public, in her presence. Confiscations seem to be a theme at the moment. Words are indeed powerful and I often think of Voltaire’s saying (which I learnt from an episode of Sharpe): God is not on the side of the big battalions, but on the side of the best shots. Marguerite was an excellent shot. Unfortunately the big battalions won in her case, for there was a whole arsenal of powerful churchmen ranged against her. The questions I am chewing over are: why on earth did Marguerite send her book to the Bishop of Châlons-sur-Marne, when she had already drawn such a draconian response from one Bishop? She was clearly not a stupid or naïve woman. And what was the real reason that the Inquisitor’s attention was drawn to this text?

The Mirror seems to contradict itself at times. Marguerite writes that there is no point to desiring special experiences of God, or “sweet consolations”; yet she describes the advanced, ‘annihilated’ soul’s experience as being ‘deliciously ravished’ by God (whom she calls the ‘Far-Nearness’). What distinction is she drawing between these two types of experience? Can the latter be viewed as pure gift? Whereas Marguerite had perhaps witnessed how hard religious folk strived to make a spiritual ‘high’ happen; at that time, practices of bodily mortification were rife. It was de rigueur for pious people to wear a hair shirt, or a ‘cilice’ with inward-facing metal studs around the waist. Self-starvation by nuns and anchoresses (female hermits who had themselves walled into a small cell in the side of a church) was seen as a saintly attribute. The cult of a size 0 figure is perhaps nothing new! Maybe Marguerite was taking a pot shot at the lengths some people go to, just to get attention. For those who submitted themselves to the severest form of solitary confinement became celebrities in their neighbourhoods. 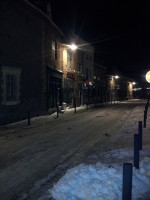 My own confinement to one room for all of an afternoon motivated me to a new expedition. I had to find somewhere to eat. My decision to try the Chat qui lit which was only a few metres from the hotel was scuppered, when I found it closed. So, up to the Place d’Armes I trudged and chose one of the several neon-lighted Brasseries at random. As I looked across to the Hotel de Ville, I wondered whether it was somewhere on this square that Marguerite’s book was incinerated. Was there a big procession and fuss made, or was it a fairly innocuous occasion? Afterwards I crunched across the hidden cobble stones and back down the Rue des Ursulines (this town is full of religious echoes). I hadn’t noticed whilst driving up and down how quaint is the street leading up to the hotel; I realized my lodgings must be in the older part of town. I have a lot to learn in the library tomorrow. I do hope it is open this time.