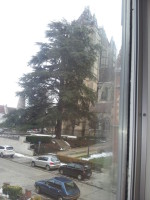 Noyon Cathedral from my room, with cedar tree

I had a great night’s sleep. My room at the Hotel de Cèdre was another room with a cathedral view. And this one is a monster of a cathedral! It was built in 1150 (finished in 1290) on the site of several previous buildings, including the one where Charlemagne (768) and Hugh Capet (987) were crowned. Charlemagne (or Charles the Great) was King of the Franks and the first Holy Roman Emperor; Hugh was the first King of the Franks from the Capetian dynasty, and so was the ancestor of Saint Louis; Saint Louis (or Louis IX) was grandfather of Philippe Le Bel, who was the King who acted against the Templars and probably had something to do with the demise of Marguerite. 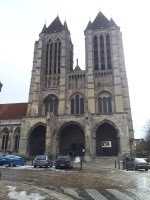 Noyon Cathedral is an architectural example of the transition from Romanesque to Gothic style, and I was going to explore it… as soon as I had had my petit dejeuner, the usual buffet style fayre of breads, croissants, jams, meats, cheeses, yoghurts, cereal….and so on.

Noyon was the centre of a religious and political heritage for many centuries. From my short walk around town the previous evening on the hunt for “La Table d’Albert” (the receptionist’s recommendation for dinner), I picked up a surprising fact - this was the birthplace of John Calvin (born Jean Cauvin). There is now a museum in his honour. Holy Roman Empire meets radical reformer! This had echoes for me of my Dad’s upbringing: he had a Roman Catholic mother and a Presbyterian (Calvinist) father. Perhaps it is no surprise that my paternal grandmother was excommunicated, not for marrying a Calvinist, but for failing to bring up their three children in the Roman Catholic faith. Hungary, with its Catholic/Presbyterian divide, is a land of extremes: extremely hot in the summer, extremely cold in the winter. The character of the Magyars has been described in two opposing ways: genetically, the Magyar gene, being descended from the Mongols, is aggressively survivalist and enduring; yet historically, during the liberation movements of the mid-19th century, the Hungarian people came to be described as “a wisp of straw” – quick to ignite they burn with intensity, but fizzle out too soon. Funnily enough, I can relate to both.

I wondered whether Noyon has had any identity crises in view of its illustrious, and discordant history? It seems quite a sleepy place, although not completely. I witnessed a massive row going on between a mother and daughter as I walked up past the episcopal palace on my way to my morning’s viewing. Rather, the mother was doing the rowing, and the stroppy daughter was not going to be bullied. Uncomfortable to watch, as it always is witnessing private anguish played out in public, I discretely gave them a wide berth﻿.

My thoughts returned to how a paternalistic Mother Church and its rebellious sons and daughters were locked into a war of attrition for centuries; the Reformation was a long and bloody process. As I turned into the square (called the ‘Place des Vollailles’ – there must have been a poultry market there), I was stunned by the grand proportions of the western façade with its two high towers which had been visible a long way off as I had approached the town yesterday. On a closer view I was equally stunned by the absence of the stone carvings that I later learnt had been smashed to pieces during the revolution. Walking into this vast building I immediately wrote in the visitor’s book my first impressions: A calm and astonishing place. Because that is how it felt. 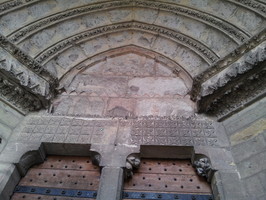 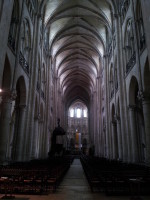 Here in Notre-Dame de Noyon, vestiges of brightly coloured walls, blue with the fleur-de-lys pattern, are still visible on some of the walls of the side chapels and western end.﻿ I find it difficult to imagine our English cathedrals awash with colour as they used to be in the Middle Ages. Internally there are few remnants of pre-Reformation era murals, such as the painting of George and the Dragon in the guise of Henry V of Agincourt, which can now be seen on the east facing wall of the Lady Chapel at Holy Trinity Dartford. This had been whitewashed over and found only centuries later. The “Reformation” in England, and the “Revolution” in France seem to have had parallel impact, and are difficult to absorb regarding the fundamental effect they have had on the religious and social life of these nations. What was the impact on the ordinary folk?

If the Church and leaders of nations, then so intertwined, had listened to people like Marguerite rather than dismissing them as “contumacious heretics”, a slower, rolling reformation of the Church might have averted the violence and divisiveness. These were of course political power struggles and not in the interest of “ordinary folk”. With the result that so much confusion has been caused about God and faith emanating from this crucible of conflicting voices. 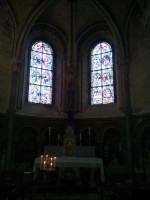 Chapel in the East chevet devoted to the Virgin Mary

The relics of three saints are situated in gilded reliquaries behind the nave: St Eloi, bishop of Noyon, St Godeberta who was a protégée of his, and another whose name I have forgotten. I was pleased that the relics were not visible through the glass, although I did not look too closely. I did not want to know what was in the box! I now need to reflect on the cult of the saints and why relics, which some risked their lives to protect during the iconoclasm of the Revolution, are so crucial to the faith of some.

The desire to hold onto a physical reality is quite understandable. I have known families hold onto the ashes of a loved one for years before being able to offer them up for interment. Saints were known and loved for the "model" life they led, as attested to by their contemporaries and by the “miracles” performed. Venerating and buying into material tokens of holiness is perhaps understandable in hazardous times; especially when one is challenged in worship by images of final judgment, being reminded daily that one’s own soul is found wanting.

The cynical would remind us that holy relics brought wealth from pilgrims to the shrine that housed them (see travel log 11th March re Notre-Dame du Saint Cordon in Valenciennes). St Louis, himself canonized because of his exemplary life (his cilice and hair shirt are on display in Treasury of Notre Dame de Paris), knew the power of the relic; and the closer to Christ the relic was, the more powerful. The iconic status of holy celebrities, as I am beginning of think of them, was carefully groomed. Hugh Capet was not a saint - i.e. he was never canonized; I do not know whether his personal habits were unholy - but he knew the iconic power of being crowned at the same place as the great Charlemagne when he was elected King of the Franks. Yes, elected! It was Hugh who began the tradition of crowning his own son before his own death to keep it in the family. Hence the birth of the Capetian dynasty that lasted nearly 4 centuries. And the “holy” significance of Frankish Kings was denoted by their anointing with the oil of Clovis – Clovis being the first Christian King of the Franks who had united all the Frankish tribes under his rule.

The word “Franc” is significant when studying Marguerite’s Mirror. “Franc” has the basic meaning of “free”, from which we derive the word “enfranchisement”. Marguerite uses this term to denote the soul who is free from will and desire; this is a soul who is unencumbered of herself and "annihilated" in love. She cannot fail to have been deliberately using terms that were loaded with political and social meaning in late feudal times. The “court of heaven” is, in her scheme, open to all; annihilation, however, brings union with the King of this court, in this life, not only in the next. She argues that those who rely on Reason as a guide are actually “serfs”, for they have not found true freedom in the generosity of God. It would be too far to push Marguerite’s words into a modern call for universal enfranchisement. But it is intriguing to note that Frankish Kings had not been elected since Hugh Capet, and rulers all over Europe were using their saintly status to cement the divinity of their right to rule. Echoes of Hungary’s Saint Stephen (Szent István – d. 1038) come to mind; his crown is reputed to be the oldest in Europe and carries mystical connotations for the Hungarian people. There are St Stephen relics too – a mummified "holy" right hand, now in the Basilica of King St Stephen in Budapest. It seems that medieval culture and our culture are not that far apart. We need someone to venerate, on a pedestal, to stand there for what we aspire to, but fear we can never be ourselves. We can also be persuaded to pour our money into their coffers.

Propaganda and the media take advantage of our weaknesses in this respect. Although we could argue that our media act like the iconoclasts of the Reformation and Revolution, when they use the same icons as whipping boys and girls. Dr Janina Ramirez is excellent on the medieval form of royal propaganda, legitimizing the King’s claim to the throne, in exquisitely illuminated manuscripts. 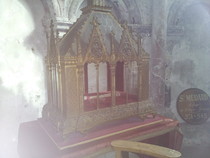 I thought I had dodged the gruesome relics, but behold! St Médard’s thigh bone, clearly visible this time, was there as large as life in a side chapel. Médard was the first Bishop of Noyon. The only spiritual benefit I can find in these human remains on display is as a “memento mori”: to remind us that our mortality is real; to think on the transitory nature of life and propel us to not waste our time. After all, “saints” are just ordinary human people like you and me, as the bodily parts reveal – however, I am not sure that was the lesson one was supposed to take from the cathedral and the veneration of its local saints in medieval times. 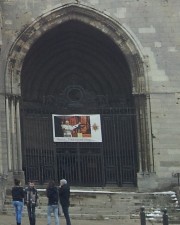 After a quick look in the cloisters and a visit to the tourist shop (9€ for a relatively slim paperback volume) I left, noticing that there was another, more recently erected, iconic image on the iron gate at the western entrance. A banner with a “thank you, Holy Father” to Pope Benedict XVI.

I had been out of the loop on the news from the conclave, and made a mental note to find out what was occurring in Rome. 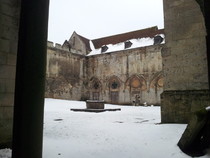 View from the cloisters 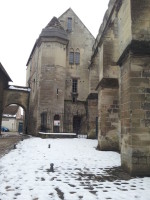 I wondered more than once whether this was really a town where Marguerite’s prison escort had stopped off on the way to Paris and to her sad destiny. And if so, where would they have lodged? As I wandered around the north side of the cathedral, still quite icy underfoot, I came across an adjunct to the cloistered side of the former abbey connected to the cathedral. It was a prison, used by former prelates for reprobates. Who knows whether this was her hotel for the night? Perhaps the majesty of the edifice behind her made her stomach churn when she thought of the ordeal ahead of her. Or was she excited to have an opportunity to discuss her theological ideas with the exalted masters of the Sorbonne? After all, one master had approved of her book. 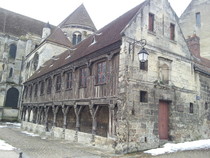 I returned to the hotel, taking snaps of the splendid early 16th century library built onto the eastern end of the cathedral. My stomach was churning a little: would the Skoda be OK? It felt like I had nearly lost the undercarriage on mounting the ramp to the hotel car park yesterday. Yes… she’s fine. Off we go. This time to Chantilly, only half an hour from Paris by SNCF.