What a massive protection racket medieval religion was. But who knew? Did the Kings know? when they emphasized their own holy significance (there will be more about this when I get on to the Parisian part of the tour). The popes whose edicts governed the lives of so many, did they know? Or did these people really believe they were God’s instruments on earth? Why did the people buy their propaganda? Were heretics just people who wouldn’t buy it? People still do accept so much of what they are fed by the rich and powerful. Is this behaviour attributable to some form of Romanticism? Of wanting to believe the magic of mystique?

And why do I wake up with so many rhetorical questions in my brain? It must have been the Kir I had last night with my dinner.

Today my task at the library is to answer some of my research questions. Like:

where did the Counts and Countesses of Hainaut live when they were in town? (Valenciennes was the capital city of Hainaut until Mons took over in 1295 – which was maybe a blow to local prestige); and what were the ramifications of the coinage changing to French currency (the écu) in 1275? And we think the whole Eurozone crisis is new!

The political and economic angle is important for understanding some of the metaphors Marguerite used in her book, but I do not think her principle motivation was to make a political point. That is not the sense I get from the theological seriousness of her thinking. However, nobody does theology in a vacuum; otherwise faith is separated from reality, and reality must be the place where truth stands or falls. Although she appears to have been small-fry (it is thought that ‘Porete’ was a nickname, meaning small leek), Marguerite got caught up in something much bigger than herself.

I had decided to pay a visit to the Musee des Beaux Arts this morning, but first things first. I hadn’t ordered breakfast today so I went in search of a café. Easy in France, you might think! But the main brasseries were not yet open and I wasn’t sure how to go on in a ‘tabac’ – do you just stand at the bar and drink your coffee there? I think I missed the day on the coffee culture of France when I was learning French at school. In my usual haphazard bumbling around till I find somewhere, I eventually found a café open, but as there were no croissants on offer I decided to do the French thing at lunchtime – have a proper meal when everything stops for two hours. Strolling back towards the museum, I was struck by some of the advertising and merchandise around the town: a shop called ‘Addiction’. What is that supposed to mean? What could possibly attract someone to buy something from a shop called ‘Addiction’? Does it evoke a vague recognition of one’s propensity to overdo it sometimes? A feeling of belonging to an addictive culture? Or is it an invitation to buy into heroin chic? Show how passionate we are? We consumers are a funny bunch. Tell us we’ll go to heaven quicker if we pay a priest to say prayers for us and we’ll shell out. No wonder Marguerite had a dig at those who ‘peddle pain’s remedies’.

Watching TV adverts in a foreign language really shows up the shallowness of the big sell. Facial expressions and imagery are the same, but without the text. I remember making a similar observation some years ago when I attended a church service in Hungary (we were visiting family out there). The gestures of piety were similar to those at home, but because I didn’t understand all the words, somehow it seemed that the externals of worship lacked depth. A sort of going through the motions, a part to play that had been learnt by rote. Is this how Marguerite came to her conclusion that sermons, masses, prayers and fasts are not needed by the ‘unencumbered’ soul, but were merely a custom? 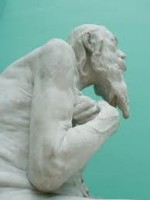 The Musée des Beaux Arts was interesting but because it was purely to do with visual arts (the clue is in the name) there was nothing medieval to see. Painting as we know it now only really got going in the Renaissance, as before then the Church was the commissioner of works of art - these were mostly frescoes which were to enhance architecture, or stained glass. Illuminated manuscripts were of course in vogue but these are kept at the library. Sculptures by Carpeaux, a local lad, were plentiful and I found the most interesting to be his sketches in clay which showed how he worked out form and movement of the human figure in numerous states. His statue of Job was also thought provoking: sitting naked on his ash pile, the expression caught on his face was one of, "What have I done to deserve this?"

I’ll spare you the details of my slap-up lunch as it would be rude after just presenting a picture of the desolate Job who could not face food, he was so broken.