What a glorious breakfast – all laid out in a buffet with everything you could think of (including bacon and egg) and a delightful selection of different home-made breads. A great start to what would be an extremely chilly day in Ghent. The satnav did its job again and I parked at the Monasterium Poortackere where I was to spend the night, and headed for the town and its historical sights. My first impression of this city, so important in medieval times, was that it was a bit grey, like an Eastern European town under the former Soviet regime. This may have been due to the weather, because it was freezing cold and the sky can only be described as ‘drab’.

It wasn’t long before the Castle of the Counts loomed into view. If ever there were an epitome of a medieval fortress, this is it. Much of it has been renovated since it fell into disrepair, but its grim history is fascinating for those who have an interest in the macabre. Part of the castle now houses a collection of torture instruments, many of which were used in this place when it became the seat of the judiciary after the counts moved out. In one room there is a guillotine, complete with head-catching basket and authentic blade. It was far from comfortable to find that what may have been the counts’ chapel (it has a cross shaped window and a dais for an altar, with side wings) was used to house iron cages in which prisoners were incarcerated. 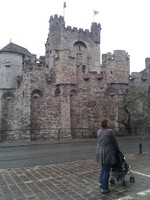 Castle of the Counts, Ghent 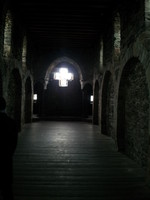 The connection I was pursuing here is with the Countess of Flanders and Hainault, who was a contemporary of Marguerite Porete, and who founded a beguinage in Ghent. Because Porete was so well educated and clearly had access to expensive resources (classical and theological texts were not easy to come by, and parchment was not cheap), she must have had friends in high places. An intriguing question is: which beguinage did she belong to? Could she have spent some time in this city?

Moving on from the castle I missed the narrow medieval streets situated behind the castle, as I hadn’t yet picked up a map. I headed for the tallest buildings: Cathedral spires and the town hall. St Bavo’s provides Catholic kitsch (not really my scene, all that fancy stuff) with lots of gold and silverwork on show in glass cabinets in the crypt. The statuette of Mary, adorned in a golden crown as Queen of Heaven, with the Christ-child in lace and embroidery reminded me of two things: 1) a similar, modern effigy I’d seen on the way into the town in a glass case hanging outside a house; 2) the memory of my own love for the figure of Mary in the nativity scene at Church when I was little. Something had always grabbed me about her, yet the gold and lace seemed to negate this story. Mary was not a woman adorned in blue, white and gold; she was a peasant woman. I need to find out more about the growth of the Marian cult in the Middle Ages. Marguerite alludes to her several times in her book, and I am intrigued how a woman with her great intellect handled the veneration of saints.

The centre of the crypt held greater interest for me. A diagram illustrated what had been part of the church in 1150, and then the late 13th century construction of the Choir. Subsequent extensions had been built around these foundations. The earliest walls in the centre have frescoes of angels, saints, Mary and Jesus. I wondered whether Marguerite had ever seen these paintings with her own eyes. 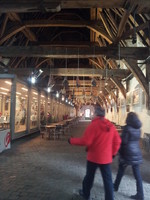 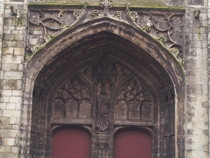 After a snack I trekked back to the hotel, calling into the medieval Butcher’s Hall, which now has a glazed, trendy café inside, and bypassed St Michael’s cathedral which is not open to visitors until 1st April. I can’t hang around till then! 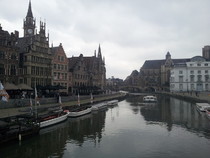 View from a bridge in Ghent

Ghent is steeped in history and has some delightful buildings. The houses of the old Begijnhof, which is no longer walled off, look as if they’ve been renovated into posh pads. I wondered about Marguerite’s social standing and why she was left unsupported and exposed when she was carted off to Paris at the end. And she had been criticized, according to her book, by other beguines. She also remained silent during her trial, if Inquisitorial records are to be trusted on this point. Is it best to keep one’s integrity, remain in the right, but alone? Or should one compromise to keep friends (and one’s life)? Does hunger for truth lead us into the temptation of splendid isolation? Marguerite suffered death for hers.﻿

I was frozen when I returned to Poortackere. Purely by chance I had discovered on arrival that his had been the site of the very first Beguinage in Ghent, established just outside the city gate (poort) in a field (ackere). The present building is a 19th century reconstruction and has now been renovated into a hotel. My nun’s cell is comfortable, but I made a mistake when asked if I wanted breakfast next day. If I had known it was so expensive I would have declined. More about that tomorrow!

There was an acoustic session in the chapel that evening, but I was beginning to feel a little conspicuous, as a middle aged woman on my own. I decided I would return to the narrow winding streets of Patershol which I had missed earlier. I found a pretty restaurant and made the mistake of having soup to start. I could hardly finish half of my second course, as tasty as it was. I hate to see food go to waste and this should not happen when so many are starving. I returned to the musings I was having this morning during my sumptuous breakfast, about famine and fasting. Choosing to fast (and we are in the season of Lent) seems to be spiritually superior to being hungry out of poverty, when there is no choice. Having the control of choosing to restrict one’s diet is regarded as admirable. Being too poor to eat is somehow blame-worthy. Charity was also on my mind, especially as the restaurant was visited by a man selling roses. (I was going to call him a beggar, but it seems wrong to define someone’s identity by their misfortune). He did not approach me, a woman sitting on her own. Even so, I felt conflicted. To give or not to give? What is it that makes me charitable with one breath, then judgmental with the next? Why is it a good feeling to give charity at one’s own volition, but then feel it is an encroachment when approached by someone asking? Actually, the man was not asking for something for nothing. Entrepreneurship such as his is admired in our society - usually. Marguerite wrote about God’s charity, that it is not a choice of the will; charity in God’s terms is given to all who are in need, regardless of who they are. Picking and choosing when to give does not, then, seem to be anything to do with God’s love. The logical conclusion would then be, that if all people gave all they had, in charity, all the time, there would perhaps be no one in need. For all would have what they need. There would be no lack. Too radical, Marguerite, too radical.

Walking back past the forbidding Castle of the Counts, floodlit in the cold, dark night I tried to imagine what this area looked like when it was all fields. Would Marguerite have walked this path, maybe hurrying to help someone in need in the poor areas of town? Did she wonder about whether to give charitably when her conscience pricked her? Did she think it cold and calculated to tithe or give any sort of pre-determined sort of charity? Had ‘free-will’ offerings been cancelled by a regulated religious code of practice that was no longer a pure response of love to another’s need?

I returned to my cell  where it was warm and cosy with these questions, looking forward to my next destination: Valenciennes, the city with which Marguerite was connected and where, possibly, she  was born.