Checking out fairly early, the journey by metro and suburban train to Chantilly went smoothly. It was good having a strong lad to help with my case which was, if anything, even heavier than when I arrived in Paris - as an apology for the trouble we had with the waterworks, our landlord left for us a lovely gift of champagne and pâté, which was now in my suitcase. 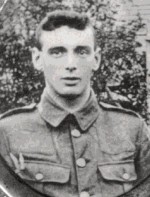 I was back in the driving seat of the Skoda, which was all present and correct and fired up again with no hesitation; we set out for Bruges where we were to spend the last two nights of our trip. I was impressed by the low charge for the station car park – only 26 Euros for the five days. As we were returning north in an almost straight line and retracing my steps, I suggested a short diversion to pay some family respects. So we visited the village of Ramicourt, where my maternal Granddad had fought in the Battle of Beaurevoir (when the allies broke through the western front in October 1918). 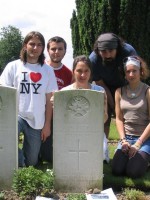 A few years ago, with the rest of our immediate family and a group of friends, Tom and I had visited the cemetery near Ypres where my Great Uncle Harry is buried. We searched for it on one of our several weekend visits to that city and the First World War battlefields. Whilst there we attended the ceremony which takes place every single evening at 8pm at the Menin Gate, when the traffic is stopped and crowds gather to remember the fallen. The experience is profoundly moving. Grown men stand and weep. One year, we contacted the Last Post Association and took part in the ceremony ourselves.

Click here to see video. The medals on my son Adrian's chest which you can see at the end of the video are my Granddad Cook's. 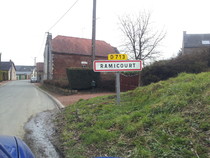 We had never been to Ramicourt. Perhaps there is less of a pull to visit a place which has a story of survival rather than the history of death and loss. For logic tells us that when the end comes, there is no moving on and there is a definite marker in the ground; but my Granddad moved on and eventually came home to Derbyshire. I remember him as he was when I was small, a gentle, elderly man. Earlier this week I had researched the British Military Cemetery online at the Commonwealth Grave Commission and found the roll of the fallen in Ramicourt – many died on the day of action for which my Granddad, John William Cook, was awarded his MM for bravery in the field, taking charge when his commanding officer fell. I had noticed that Lance Sarjeant Hunt, in grave A6, was from Riddings. I felt sure my Granddad would have known him, as Riddings is in spitting distance of Ironville where he came from, and where my Grandma was keeping the home fires burning. I wondered whether he and Sarjeant Hunt had joined up together in one of the ‘pals’ units.﻿ 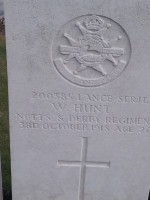 Tom and I we paid our respects and set off to find our way back to the motorway. The tolls were now much easier to negotiate with a passenger in the left seat, although I never seemed to be able to get close enough to allow Tom to reach comfortably.

The journey was uneventful until we turned off the ring road and into the city of Bruges to find the Hotel Jacobs. Somebody had removed all the cobble stones but nobody had informed the satnav. We did some doubling back and eventually found the right street. We booked in and we found a little surprise there - the rainbow-coloured lighting behind the headboard of Tom’s bed. Groovy. We also had a view of – yes, you guessed it – a large church opposite.﻿ 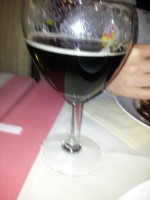 The weather was turning really cold again and darkness was falling, but we decided to walk into the centre of town and find somewhere to eat. We ended up in the picturesque market place and chose one of the many restaurants surrounding the square. Tom tried a dark beer, served in a massive glass goblet, I stuck with a small light beer. We wondered whether sitting outside under the canopy was a good idea in this weather, but I had already noticed that in France and Belgium the café culture had organised itself with robust patio heaters. Again I cannot fault the French!

Prices were high here in this city, which is a world heritage site in its entirety, so one just has to live with that. What was annoying, however, was that on this one occasion, we were not going to leave a tip; apart from the fact that we had no euros left, the prices were ridiculous and my expensive chicken was tough and chewy. At every restaurant or bar that I had frequented in the last two weeks, I, or Tom, had left a generous tip - at least 10%. Blow me down if the waiter in Bruges didn’t go and ask me if I wanted to add a tip to the bill when I handed him my credit card. Ironic that this was the first time I’d been asked. I said no. He asked whether something was wrong with the meal; so I told him. He then went into a strop. We left. I was not amused. 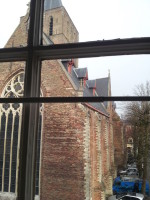 On the way back to the hotel, Tom suggested that the waiters were perhaps paid on commission here, or at least may not be paid well. Our waiter may even have had a bad day under pressure. Tom is in the hospitality industry, so he had empathy.

I couldn’t get a wifi signal in the hotel room so we settled down to watch a film on TV called Joshua. This is a psychological thriller like The Omen but without the religious superstition, about a child prodigy who gradually destroys his family after the birth of his sister. This sparked a discussion about how difficult it is to cope with babies that cry a lot. Now, I was the one who had empathy.

There is a native American saying: do not judge a person till you have walked in their moccasins for 6 months. I really did try to understand the waiter’s point of view. 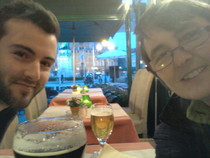 Today I had a sense of letting go of the trail and returning home. Not that Bruges is home, or in any way feels that way. If anywhere felt like home for me on this journey, it was Valenciennes and I suspect that I will be back there one day. Spending time with Tom reminded me how our family were now grown. I felt a new stage of life was about to be born for me, as “une dame d’un certain age”.

Marguerite must have found space somehow to write and I would have to do the same when returning to Cornwall if I was to try and bring her story to life. But let’s not jump too soon - I still had a couple of places to see to round off my research trip.