Not a particularly good start today. First, the shock of breakfast. It was plentiful and varied to be sure, but I was gobsmacked to discover that it was to cost €17.50 (about £15). I worked out that the bottle of champagne that was at the end of the buffet for those who want a special breakfast, must have been the pretext for charging so much. But I had to drive! (I did pocket an apple to take with me for later). Feeling done over, I collected my belongings in a less than good mood and packed the boot as the snow started to fall in earnest.

Next, the arctic weather was one of the unforeseen happenings that did not go through my mind on the first morning. My immediate worry was the drive from Ghent to Valenciennes, in the snow, on the wrong side of the road, in a 10 year old Skoda. To cap the lot, I banged by head on the boot as I closed it. I was relieved when the Oktavia started first time in the sub-zero temperature. I silently thanked the chaps at Lugg’s garage who had checked over the car for me last week.

My intent had been to drop into Ghent’s ‘small beguinage’ (founded 1235) on the way out of town. Yes, there were lots of these communities in their heyday, full of women who could not afford the dowry to be received into a convent, or were not highly born enough, and who indeed did not wish to be under such rule. No wonder there was ambiguity in the Church hierarchy about these ‘holy’ women who devoted themselves to prayer and good works.

I wonder how far our perception of the past is governed by the most conservative and reactionary eras we have known in our history. What I mean by this, is that we have been given to understand that women were not ‘liberationist’ till last century, that they did not think about ‘feminist’ ideas. Feminism is of course a modern ideology, but women have tried to break out many times from the strictures imposed upon them. Then - always - has come the backlash. The draconian measures of the Council of Vienne in 1311-1312, in the wake of Porete’s execution for heresy, forced beguines to knuckle under and agree to semi-enclosure and male supervision. It can be no coincidence that they had started to get too successful commercially at that time… and too lippy. The same Council also dealt with the Knights Templar crisis, and there is a definite connection between the demise of the Templar Order and that of Marguerite. 54 Templars were burnt in a field in Paris on the very day that her book was condemned by 21 theologians from the Sorbonne. She was to follow them to the stake only 3 weeks later. I cannot rule out another issue of gender and sexuality that was rumbling in these fraught times. One of the confessions forced out of the Templars (under torture) was that the order encouraged the ‘abomination’ of male on male relationships. Plus ça change.

Anyhow, the snowfall changed my itinerary. I decided to get straight off and take the drive steady. It snowed all the way. I had booked to stay 4 nights in Valenciennes, so there would be time for the weather to change for the better before my next big drive. I was pleased to find that French drivers are in fact very courteous and sensible. No silly speeding.

Arriving at the Hotel Notre Dame, it perhaps should have been no surprise to find the Basilica of Notre Dame du Saint-Cordon was directly opposite. And my room looked straight out onto the façade. Parking was a bit of an issue but it amused me to find that there is no charge for parking anywhere in town between the hours of 12 and 2pm. How the French do love their proper dinner break. I cannot fault them.

As the snow came down, I connected into the internet and researched the ‘miracle’ after which the basilica is named. It is a fairly recent building (19th century) but harks back to the story of the terrible plague of 1008. A hermit, Bertholin, had a vision of the Virgin Mary who directed him to tell the people of Valenciennes to witness from the battlements her protection of the city on the eve of the Nativity. Sure enough, she appeared and by holding a cord which surrounded the city, she protected it from pestilence for ever. A procession takes place every year on the Virgin’s birthday, 9th September, around the 14km route marked by the holy cord. The shrine built in the Middle Ages was naturally an attraction for pilgrims. Every medieval town needed its pulling power, like Breskens now has its Michelin starred restaurants and the Monasterium Poortackere uses its religious ‘concept’ to flog expensive breakfasts in its vaulted refectory.

I really am not bitter.

I also checked on library opening times and embarked on a massive surf of their online manuscript cache. Incredible how much is made available by the ‘patrimoine’ section. It was also a stark reminder of how massive the Revolution was for the identity of this nation. The vast majority of the medieval holdings had been confiscations from that period. It is possible now to view a 9th century manuscript of the Book of Revelation online (click here). Amazing.

Tomorrow would be a foray into the library, but tonight I will try and find a good place to eat as lunch was called off due to snow. On my way to explore the gastronomy of this town, I popped over the street to read the notice on the West door of the basilica. The building is closed due to renovation, but the statue of the Virgin (the one carried around in the September procession) is at the Cathedral of St Géry for safe keeping. I keep bumping into effigies of Mary and no doubt will meet this one another day when I go to visit the said church, the oldest of the city. 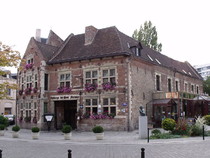 I did find a lovely old inn, a 16th century building, but a little posh: the Auberge du Bon Fermier. Meat is very much on the menu and a large piece of suckling pig, their speciality, was roasting in the fire. I still feel quite awkward as a single woman dining on my own. I thought about all the older single people I know who have to eat regularly without company. At least when Ian is away I have Ben! So I am looking forward to meeting up with Tom in Paris, but first, I have some research to do in a library. I hope I will be able to make myself understood well enough to find what I am looking for. I have noticed that my spoken French is rather rusty!